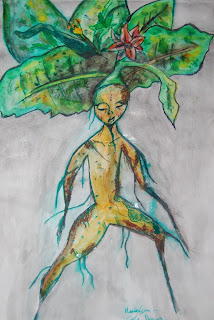 Magic Plants- Mandragora.  (Very toxic , not to use without knowledge)

Mandragora officinarum or mandrake  are the types of plants named after the Mandragora.

Magical Use : A Mandrake root, hanging in a house fire place, brings protection and prosperity.
Also near to a bed, would protect from bad dreams, canceling bad spirits,  thats why this root is used on exorcism.
Native of the European zone, has been expanded all over the world, is mostly no longer used for healing anymore, but the history, the antrophology behind it , the leyends, and supersticion, makes it one of the most famous plants in magic world.

Both the Bible and the Torá (Jewish holly book) mencion the plant in several ocasions beeing this probably the older reference to the plant.
"And Jacob came out of the field in the evening, and Leah went out to meet him, and said, Thou must come in unto me; for surely I have hired thee with my son's mandrakes. And he lay with her that night. —the Bible, King James Version, Genesis 30:14–16"

But not only Religion books, also writters like Machiavelli in 1518 or Shakespeare himself, who mencion the Mandragora at least 4 times in his master piece  Romeo and Juliet.
IV.iii "Shrieks like mandrakes' torn out of the earth."

But to fully underestand what makes this plant so special, would have to mencion that the root of the plant it self, seem often to have a human figure, it grows this way naturally, so we can imagine that in the old world, when people harvesting, finding a plant with a human form root, would have been surprising.
It it said in the folk tales that when someone try to harvest the plant, the root would scream, so loud that would leave deaf or blind to those trying to harvest, for this reason, its said the use of tie a dog to the plant, and offer him food from the distance, so that the dog would pull off the plant himself.

In the Witch books, is said to pick it up with gloves, and leave in the place as tribute 1 coin, salt and bread.

To activate the magik power of the plant someone would have to leave it at home for 3 days, and then put it inside a jar full of water, to leave it over a night , then the plant would be activated, as mencion in the top of the text is a very toxic plant, someone have to be careful with it.
Once activated is used a lucky charm, would bring money, spiritual peace, cancel illnes, and bring adivination powers. 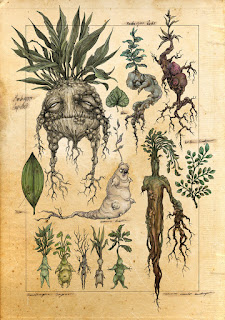